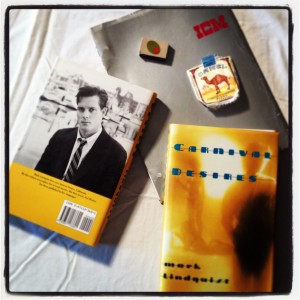 Published by Atlantic Monthly Press in 1990, Carnival Desires is now available on Kindle at Amazon.  "Carnival Desires follows a group of friends in their twenties through the trapdoors and funhouse mirrors of Hollywood in the 1980s…."

What was once contemporary fiction is now a period piece. You can read about Carnival Desires in Vanity Fair or Details Magazine.

"Great postmodern literature. Romantic and cynical, true and original, full of modern ideas and seductive moments ... as of its time as such classics as Day of the Locust and The Last Tycoon."
– Details Magazine

"A witty minimalist epic ... with the smart, spare prose only an outsider on the Hollywood inside can afford."
– Vanity Fair

"Carnival Desires is a story of today's equivalent of the Bright Young Things. This is not a novel I would recommend to my mother or my aunts, but every priest, teaching sister, and director of religious education ought to be required to read it. Then they would understand why our religion must be taught exhaustively.... As for Mark Lindquist, he may well become the Evelyn Waugh of 21st Century America."
– Catholic Twin Circle

"What could be more exciting than life in the fast lane of Hollywood? Just one long glitzy party in that familiar fantasy land of mansions and swimming pools, studios and trendy clubs. The only problem is, how do you get out of the fast lane when you find yourself slowing down?

This is starting to be the question for Bick Smith, going on 30, and his wealthy and/or talented friends Willie and Merri, Oscar and Mona, Tim and Joy. Willie and Merri will make it okay because they love each other, Oscar and Mona, probably, because they love their work. But for Tim and Joy, the only way out is a fatal crash. Bick gets off with only a smashed fender and a flat tire, presumably because his feelings are so ambivalent. One episode sums them up: Bick and his girlfriend, Jayne, go on the "Graveline Tour" -- the sightseeing excursion past the places where famous Hollywood stars have died. As the trip proceeds, the guide's repetition of "heavy alcoholism," "rampant promiscuity" and "tragic death" becomes numbing: "Bick was both pained and perversely proud to be reminded that he was a part of something so ugly and so historically evil."

Between his friend Libby, who doesn't really belong to Hollywood, and Jayne, who is its very embodiment, the living projection of his own fiction, Bick wavers. Similarly, he wavers between the urge to run home to Seattle and lead a "normal more religious life" and the battered but still-breathing sense of vocation and of solidarity with friends in Los Angeles.

Like the milieu it describes, Mark Lindquist's novel is glamorous, ribald, and clever if not always careful. What holds it together is a style of intense nervous suspense, reflected in the characters' anxiety about endings. Oscar and Bick are both rewriting the ending of a film that in some ways is each man's own story. Will Oscar's teenage hero go for the bimbo cheerleader, or will he realize in time that it's the other girl he really loves? Will Bick's tormented husband and wife save each other or destroy each other?

Despite its suggestive title, there is no overt questioning of values in Carnival Desires. Values are traditional and mainstream. The novel even ends with a wedding. What is subverted is the role those values play. The characters seem to glimpse them in outer space from time to time, but almost never as guiding stars -- much less stars to wish upon.

Anyway, are people who already have everything still capable of wishing? If they don't constantly enjoy self-satisfaction, at least they do practice constant self-indulgence. And as Lindquist shows, even their self-destructive tendencies are perversely self-protective, a defense against pressure and paranoia, a substitute for religion and conscience.

The reduction of acts to images and the rejection of action as value-creating mark this novel's post-modernism even more than its hip style and La Dolce Vita subject matter.

Carnival Desires may share the fate of may other works that paint too colorful a picture of the evils they purport to denounce. The public that finds books less satisfying than sex, alcohol, drugs, and MTV, is hardly likely to read -- much less heed -- the author's warning to grow up before it's too late.

Despite his variation on the now-popular orgy-in-a-graveyard theme, we have a sneaking feeling that Lindquist still thinks some people can have it all."
– Sally Pouvoir, Houston Chronicle