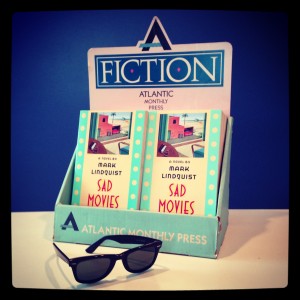 "It's a book that reads like a movie and demands to be read in one sitting; you get the same pleasure from reading this book that you can get from movies. It not only captures a certain Hollywood lifestyle, but it also sums up the period.... Sad Movies is both hilarious and affirmative, two traits which one rarely comes across in good books about Los Angeles — and which are both totally welcome here."
– Bret Easton Ellis

"Perceptive and hilarious.... One of the best sketches about a young man's attempt to find himself since The Graduate."
– New York Newsday

"Among the most promising writers of his generation.... Lindquist's sharp eye for detail defines not only his characters, but the entire atmosphere of 1980s Hollywood."
– Los Angeles Reader

"A strange, swiftly paced story that is funny and curiously powerful."
– Denver Post

"Clever ... whimsical ... a novel in dialogue about seeking the meaning of life."
– Publisher's Weekly

"Not long ago, Gary Fisketjon left Vintage Books, where he had made a significant mark, to join Atlantic Monthly Press. He has taken with him at least one major author in Richard Ford, and the strong visual design that characterized his Vintage books. He has clearly not lost his ability to find good young American writing, if this new trade paperback is any indication.... Sad Movies begins like a hip, west coast version of Kingsley Amis's Jake's Thing, it soon turns into a sort of hip, west coast G.K. Chesterton's Manalive.... Sad Movies is a rapid-fire, roller coaster sort of book.... Mark Lindquist has written an intriguing, likable novel, and Gary Fisketjon's post-Vintage reputation appears safe."
– Bookroom Review